Having a tight pelvic floor sounds like a good thing, right? This is an area where many women have real problems—particularly after childbirth and as they age. When I began studying structural, integration (a type of bodywork that focuses on lengthening and stretching connective tissue a.k.a. fascia) about a decade ago, I learned about how integral the pelvic floor, which is a hammock of muscles that attach the pubic bone, tail bone and sitz bones, is to the human body. These layers of muscles literally hold your bladder, uterus, vagina, small bowel, and rectum in place.

As I worked with more and more clients, I also saw how interconnected the pelvic floor is not only to issues in the body like pelvic pain, lower-back pain, and incontinence, but also to emotions like anxiety, stress, and fear. Most of us go through our lives without any real connection to our pelvic floor—nearly one in four U.S. women are diagnosed with a pelvic floor disorder during her lifetime.

Even in women who don’t suffer from pelvic floor dysfunction, the area tends to be weak, and we can no longer mindfully relax it. Chronic tension isn’t good for any group of muscles, and the pelvic floor is no exception. Being able to mindfully relax your pelvic floor muscles not only benefits the body physically, but can help immensely with releasing emotional stress, fear, and blockages that people can hold in their bodies.

Most of us go through our lives without any real connection to our pelvic floor—nearly one in four U.S. women are diagnosed with a pelvic floor disorder during her lifetime.

Women have been obsessed with the idea of having “tight” pelvic floors for some time–which makes sense given the amount of information that is out there now about kegels. And while the doctor who created them, Arnold Kegel, M.D., deserves a hat tip for bringing awareness to the need for stronger pelvic floor muscles, the kegel itself is not a balanced approach to strengthening this very important group of muscles. The goal to have a tight pelvic floor is missing an important piece.

Just like adding variety in to your workout routine (i.e. cross training) is super good for you, your pelvic floor muscles need a more balanced and functional approach to keep them in top shape too. In other words, kegels are only part of the equation since they are a concentric contraction. In order for a muscle (or a group of muscles such as the pelvic floor) to truly be strong, they must eccentrically elongate. And a concentric contraction causes muscles to shorten, thereby generating force, whereas eccentric contractions cause muscles to elongate in response to a greater opposing force. Translation: Kegels only work the muscle in one way (tightening). If you want to have real strength in your pelvic floor, it must be able to stretch or elongate and release, as well as tighten.

Kegels, while important, cause the pelvic floor to become tight sure, but they can also make this important part of the body hypertonic—essentially perma-flexed where you are clinching too much. Imagine flexing your bicep constantly and never fully letting go: The muscles will become weak, exhausted, and disconnected. The same thing can happen to the pelvic floor and only doing kegels means the muscle can only do one thing—clutch and squeeze—which will make the muscle lose tone and strength.

The pelvic floor, also known as the root chakra, is deeply connected to fear, especially around our health, family, and financial security.

Training your pelvic floor to be strong and resilient rather than just tight
Physically, a more resilient pelvic floor means you can have a deeper connection to your entire core (a.k.a better, stronger abs). Research shows that it also prevents pelvic pain and incontinence, helps provide relief from lower back pain, and can lead to better sex. (Who doesn’t want all of the above, right?)

Emotionally, I’ve seen amazing shifts with my clients as well. I had one who came to me struggling with an entire set of physical issues—she was diagnosed with osteoporosis, had lower back pain, tight hips, and the inability to lose weight or strengthen her core muscles. In addition to that, she also had immense stress about her family and finances and had lost her sex drive. She’d seen numerous doctors, bodyworkers, and therapists with no relief. Because I specialize in the pelvic floor, I saw right away that working on her resilience in this area would help. And it did. Once I worked with her on learning how to connect to, relax, and strengthen her pelvic floor, she was able to finally let go of the “forcing” and trying to control everything in her life. She lost weight, reversed her osteoporosis, and regained her sex drive after just a few months.

To really grasp the emotional connection to the pelvic floor, it’s important to know that in Eastern tradition, the pelvic floor is also known as the root chakra, the energy center at the base of your spine. It’s deeply connected to fear, especially around our health, family, and financial security.

The stress connection
I’ve seen that the health of the pelvic floor has a “trickle down” effect in the lives of my clients (and in my own experience). Oftentimes, when the pelvic floor is in a state of perma-flex or tension, so is the emotional state or energy of that person (i.e. they are stressed out, emotionally blocked, unable to “turn off” and truly relax). When it comes to looking at stress from a holistic standpoint, it’s vital to consider the state of the pelvic floor since it is so deeply connected to the nervous system.

Basically, the nervous system is a network that runs up and down the spinal cord (beginning at the base of the skull and ending at the sacrum, which is at the base of the spine). The sacrum is located directly above the pelvic floor. This means if we truly want to learn how to manage stress, heal, and rest, we need to look at the root of the body’s stress response system, which is the nervous system that begins at the sacrum. Another way to think about the sacrum and the pelvic floor area is the stress response “on/off” button in the body. Yes, it’s that powerful.

Cultivating a strong a resilient pelvic floor
So how do you get a resilient pelvic floor? This takes some time and work, but I’ve seen it transform the lives of so many of my clients, which is why the topic is central to my latest book, The Power Source. In this book, I give an entire program for creating strength and resilience in the pelvic floor. But in the meantime, a few exercises that are helpful that you can try at home to get a resilient and strong pelvic floor are deep squats, in which you get as low to the ground as you can in the move, side lunges, and doing pelvic tilts (i.e. cat/cow poses) while seated on a soft ball, like the type you’d use in a Pilates class, rather than on all fours. 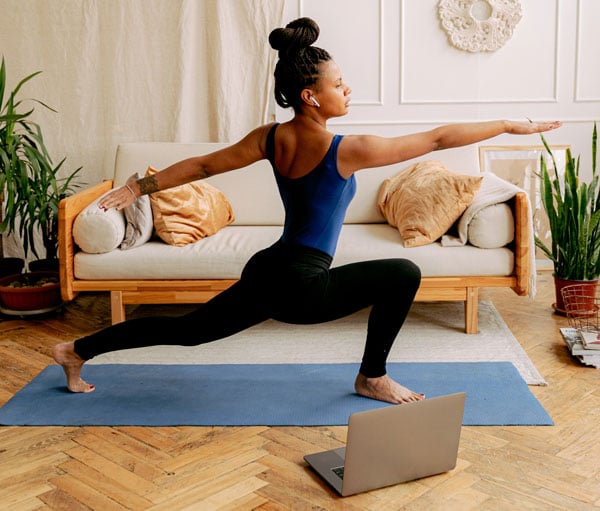 Lauren Roxburgh is an internationally renowned author, wellness educator, leader and inspirational speaker. Dubbed “The Body Whisperer,” she regularly works with Hollywood A-listers along with some of the greatest athletes and surgeons on the planet. Roxburgh is also the the founder of the popular Aligned Tribe Collective community, the Aligned Life Studio, and the creator of The Body Collection. She serves on WellSet's board of advisors.

REPLAY: The Power Of Posture: Prepping the Body for WFH

This group class replay is brought to you by WellSet’s Re-Open Festival. In these thirty minutes you will center in...

It sure isn’t easy to stick to your healthy eating habits during the holiday season and let’s face it: After a year...

What the F is Fascia?

One of the keys to having an efficient metabolism, improving posture, and reducing pain is a body that is in correct...